And this is not just ANY birthday! The great author was born 200 years ago today! In England they’re actually having some pretty significant celebrations. I truly wish I was in London right now, but alas my budget won’t have it, my body couldn’t handle it, and I’ve got a book to write! However, just for a while today I think I’ll curl up and watch some of my favorite scenes from the miniseries “Bleak House,” which was made for Masterpiece Theater on PBS. A-ma-zing! 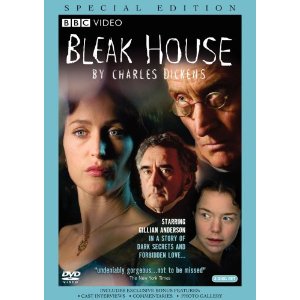 When I began my exploration of Dickens’ works, I quickly realized that I didn’t have time to indulge in such long, deep novels, but I realized almost as quickly that there are some excellent film versions of his stories. Something else I discovered as I have watched and rewatched these films, is that his lesser known works are actually rather romantic. You won’t find much romance in “A Christmas Carol” or “Oliver Twist” but I believe that deep down, Mr. Dickens was a hopeless romantic.

If you’re up to reading his novels (I have some friends who have loved them) I would recommend “Our Mutual Friend,” or “Little Dorrit,” as well as the above mentioned “Bleak House.” Remarkable stories with happy endings. I’m fascinated with the way he can take so many different characters and situations which might not seem to have any connection at all, but then you begin to realize threads are being woven together, and in the end, every single character and situation were necessary to bring the complicated plot to its fruition. Poetic justice abounds. Everyone seems to get exactly what they deserve. But be prepared for two extremes: his humor jumps out when you least expect it AND the villains are genuinely terrifying at times. I would love to hear comments on anything you’ve read or seen, or if you embark on reading (or viewing) any of his works, I’d love to hear about that too!

Such a perfect tribute. Happy birthday Mr. Dickens and thanks for the enlightenment and pleasure your work has brought to millions.

Happy Birthday Charles Dickens. Thanks for sharing this. I think I'll pop in to the library later today and see if I can find these novels. The only movies I've seen from his books are A Christmas Carol and Oliver Twist.